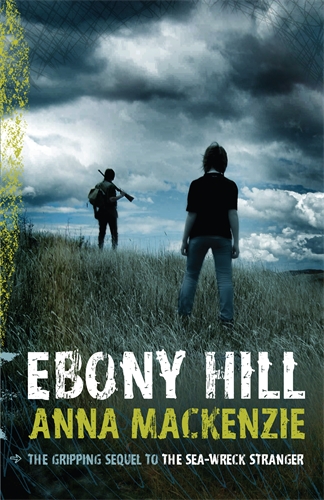 Loading...
Shortlisted for the 2011 NZ Post Children's Book Awards, Young Adult Fiction category, this powerful post-apocalyptic drama is a sequel to the award-winning novel The Sea-wreck View more
Save for later

Anna Mackenzie writes contemporary and speculative young adult novels. The Sea-wreck Stranger, the first volume of her 'Seawreck Stranger' trilogy, won an Honour Award at the 2008 NZ Post Children's Book Awards, was joint winner of the 2008 Sir Julius Vogel Award and was awarded a prestigious White Raven Award for outstanding children's literature. The book has been published in both Australia and France. Its sequel, Ebony Hill, was shortlisted in the Young Adult Fiction category of the 2011 NZ Post Children's Book Awards. The final title of the trilogy Finder's Shore was published in 2011. Anna's other titles include High Tide, Shadow of the Mountain and Out on the Edge.She has been awarded five Children's Literature Foundation Notable Book Awards. Anna lives on a farm in Hawkes Bay with her family. She works as a magazine editor and teaches creative writing. Anna is on Facebook (www.facebook.com/annamackenzie.nz.author) and has a blog (annamackenzie-writes.blogspot.co.nz.) For the New Zealand Herald, Margie Thompson wrote of Mackenzie's 'terrific feeling for dramatic pace, and for the emotional and physical landscape her beleaguered teens inhabit'. Kate De Goldi has praised Mackenzie for knowing 'how to structure a book and how to paint with delicate brushstrokes'. Reading Time commended her intelligent writing and said it is 'perfectly pitched' for her readership. Respected Children's Bookshop owner John McIntyre, reviewing The Sea-wreck Stranger on National Radio, said, 'what really stands out for me is the sheer beauty of the writing. Here there is a wordsmith at the top of her game ... it's one of those novels where a great story meets a great storyteller.' Viewpoint concluded: 'This book is both powerful and haunting, a true delight to read and well-deserving of its award-winning status.' Reviewing Ebony Hill in the Otago Daily Times, award-winning writer Tania Roxborogh exclaimed 'Harry Potter - time to step aside.'
Close