Library Browse SLEEPING WITH THE DE... 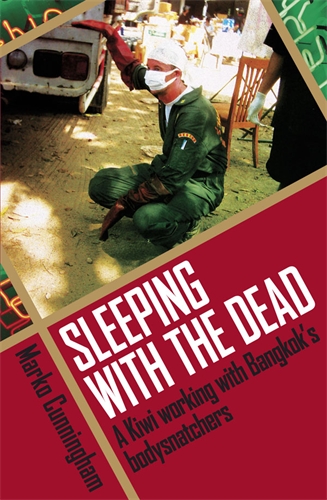 Sleeping With the Dead: A Kiwi Working With Bangkok's Bodysnatchers

Loading...
"Today I raced through the streets of Bangkok in my rescue vehicle, extracted an injured man from a truck at the port, then took him to hospital. Shortly after, in another area, I View more
Save for later

Marko Cunningham is author of Sleeping with the Dead: A Kiwi working with Bangkok's bodysnatchers, an account of life as the only foreign volunteer ambulance officer (or 'bodysnatcher') working for Bangkok Free Ambulance in Thailand, including the tragic aftermath of the 2004 Boxing Day tsunami. In 2008 he was awarded two Special Service Medals by the New Zealand and Thai governments. Born in England, he was brought up in Wellington, New Zealand, and earned a double degree in linguistics and management before becoming a Buddhist and working in, and travelling through, Asia. He is now a well-known face in Thailand and has been frequently featured by international media, including the Lonely Planet TV series Six Degrees of Separation. He has worked as an emergency medical technician (EMT)/Fire Rescue worker and First Aid/CPR instructor in Thailand since 2000, and runs a foundation in Thailand and New Zealand that supports his Emergency Medical Services work in Bangkok. He is also the director of Bangkok Free Ambulance. He has contributed to To the Rescue: Stories from healthcare workers at the scenes of disasters. A Thai edition of Sleeping with the Dead publishes in 2013. Sleeping with the Dead is an account of his crazy adventures in the happy chaos that is Thailand - involving snakes, gun-toting policemen, bombings, fires, traffic accidents, and more - as well as his moving first-person account of working in cadaver recovery and other aid in the popular tourist resort of Phuket, following the 2004 Boxing Bay tsunami.
Close