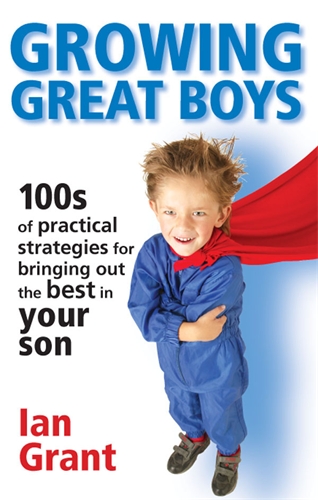 Growing Great Boys: 100s of Practical Strategies for Bringing Out the Best In Your Son

Ian Grant and Mary Grant are high-profile parenting and relationship gurus in New Zealand who have written a series of bestselling parenting books, including Growing Great Boys, Growing Great Girls, Growing Great Marriages, Growing Great Families, Communicate and Fathers Who Dare Win. They are the founders of Parents Inc. (now called the parentingplace.com), speak at seminars and have had long careers as media stars on television and radio. Mary founded faith4families org; while Ian founded fatherswhodarewin.com ('giving fatherhood a better name'). For their work with youth and families, Mary has been awarded the Queen's Medal, and Ian the Queen's Service Order. In 2013, Ian was named Senior New Zealander of the Year. The Grants have a Christian background, and were founders of Youth for Christ and the Campus Life clubs. They believe that parents each have their own distinctive role to play, and that many of society's problems can be traced back to the absence of strong loving relationships between many parents and their children. Going against the tide of 'political correctness', they advocate that men parent like men, becoming good role models for manliness in their children's lives - following traditions of being providers and protectors, heroes and sportsmen, as well as mentors and confidants. While anger and aggression should be controlled, men should still parent in the ways that come naturally them - with physical interaction and risk-taking. Similarly, they believe that the innate qualities of boys and their behaviour should be encouraged and channelled positively, rather than suppressed in today's PC environment. Their road-shows are marked by humour and practical strategies for dealing with everyday parenting situations. Reviewers have identified the Grants approach as threefold: to inspire, share wisdom, and encourage.
Close