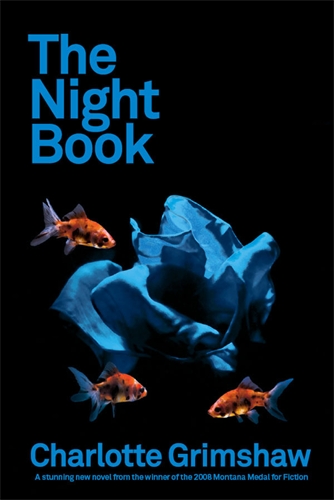 Loading...
Sharp, moving, brimming with insight and observation, The Night Book is at once a meditation on power and politics, and an intensely humane look at the choices people make as they struggle, against the odds, to maintain love and integrity in their lives.
Save for later

Charlotte Grimshaw is the author of a number of critically acclaimed novels and outstanding collections of linked stories. As a reviewer in The New Zealand Listener noted: 'A swarming energy pervades every page she writes ... her descriptive writing has always been of the highest order. Most of it would work just as well as poetry.' She has been a double finalist and prize winner in the Sunday Star-Times short story competition, and in 2006 she won the BNZ Katherine Mansfield Award. In 2007 she won a Book Council Six Pack prize. Her story collection Opportunity was shortlisted for the 2007 Frank O'Connor International Prize, and in 2008 Opportunity won New Zealand's premier Montana Award for Fiction, along with the Montana Medal. She was also the 2008 Montana Book Reviewer of the Year. Her story collection Singularity was short-listed for the 2009 Frank O'Connor International Prize and the South East Asia and Pacific section of the Commonwealth Writers' Prize. Grimshaw's fourth novel, The Night Book was shortlisted for the 2011 NZ Post Award. She writes a monthly column in Metro magazine, for which she won a 2009 Qantas Media Award. Commenting in The Guardian on Singularity and Opportunity Jane Campion said, 'She is a master of mystery, very contemporary and astute. Her language is relaxed, spare and perfect.' The Times Literary Supplement noted 'Grimshaw's vivid descriptions...are a joy.' Credited with 'writing some of the smartest fiction around' by the Dominion Post, and rated by Chris Cole Catley 'as the most important, significant and arrestingly talented of our middle year writers', Grimshaw's The Night Book was praised for 'tread[ing] perfectly the divide between fact and fiction' (Sunday Star Times). In the same paper, Kerre Woodham wrote of it: 'This is a beautifully written novel - suspenseful, topical and a wonderful study of human relationships... The characters are fabulous and the writing's superb.' Charlotte Grimshaw's latest novel, Soon, will be published by Jonathan Cape in the UK in July 2013. On TVNZ News, Steph Zajkowski said, 'Opening the pages of Charlotte Grimshaw's new novel Soon is akin to tilting the blinds in a dim room; the razor-like precision of her words flood your mind with crisp, searing light, such is the vivid clarity of her prose... Soon is clever and uncomfortable at the same time. Charlotte Grimshaw has a peculiar and very satisfying knack of infusing a sort of heat and energy into her pages and cultivating a low-lying sense of tension into every line. Plus she's a connoisseur of human behaviour.' Stephanie Johnson wrote in the New Zealand Listener best books of 2012, 'Soon is incisive, clever, wickedly funny and political...a must read for all of us at this time.' Also listing Soon as one of the best New Zealand books of 2012, The Dominion Post noted, 'A novel about class and aspiration in contemporary Auckland, Soon shifts gears and becomes a gripping thriller. Its behind-the-scenes views of fictional National party mandarins on holiday feels both hilarious and terrifyingly accurate.' The Herald on Sunday called Soon a 'superb New Zealand novel - Grimshaw's bold and biting satire on the present political situation in New Zealand. Exhilarating!' Titles by Charlotte Grimshaw: Provocation Guilt Foreign City Opportunity Singularity The Night Book Soon A full list of Charlotte Grimshaw's titles, reviews and selected Metro columns can be found on her website: http://www.charlottegrimshawauthor.com/
Close